The Bursary has been named after the Cachalot Past Captain who despite failing health was instrumental in steering the Award to its present position.

The SMMC Bursary of £1,000 was awarded annually to a student at Warsash Maritime Academy studying for a higher Certificate of Competency.  The money was only be used as payment towards the cost of course fees. When the proposal to award the Bursary was under discussion it was decided that it should be open to both deck and engineering students to reflect the fact that membership to the Club is open seafarers from both disciplines. It was also decided that the Bursary should be open to students of any nationality. When it was agreed in 2009 that the Bursary should go ahead it was also decided that it should be a for a three year trial period and then reviewed to ascertain whether its objectives had been achieved and whether it should be continued, and in total four awards were made in the years 2009 to 2012.  After making the award in 2012 it was decided that the whole system needed reviewing as it was felt that we were not fully achieving the aims and objectives that had been set when the bursary was first introduced,

After much discussion, and bearing in mind that one of the objectives of the Cachalots is to offer financial assistance to worthy causes, it was decided that the bursary should still continue but in a different format providing money was available.

A number of ideas were put forward and discussed and it was finally decided that we should make the £1,000 available to the Sea Cadets. The Sea Cadets is a very large nationwide voluntary youth organisation and in the circumstances it was agreed we would channel our efforts to the Sea Cadet units who in various ways help the Cachalots, particularly at the Shipping Festival Service at Winchester. Those two units are the Southampton and Winchester Units.

We were also aware that just giving each unit £500 for them to decide what they would spend it on is not really a bursary. We felt it should go to something specific and what better than an aspect of the cadets training. One particular area of their training is to undertake Offshore Training on one of the vessels owned by the Marine Society and Sea Cadets. Specifically: TS Royalist – a new 32m brig which replaces the previous vessel of the same name and comes into service in 2015 – offering the unique experience of sailing a square rigger with emphasis on team work and the personal challenge of working aloft. TS Jon Jerwood and TS Jack Petchey – power vessels – offering experience at sea focussing on deck work, navigation, bridge watchkeeping, cook/steward and a taste of marine engineering. The cost to a cadet of one week onboard the above is now £275 (2015).  That money has to be found from various sources and in many cases the cadets’ family can only afford a small amount. We felt that our money could not go to a better cause than to help pay some of that money as a bursary. Communication was made with the COs of both units explaining what we had in mind and laying down fairly stringent requirements for a cadet to apply for assistance. The Management Committee would have the final say on whether the amount of money requested should be made available.

The objective of the SMMC is “to encourage and maintain the younger generation’s interest in ships and the sea through association with a recognized youth organisation”.

The winner of the first Bursary in 2009 was Matthew Nicholls, a deck officer with Carnival UK, who was attending the Chief Mate/Master Programme post HND 15 week course.  He was successful in his examinations.  At the time Matthew had been with the company since he first decided on a career at sea.  He already had a BA (Hons) in Business Studies and an HND in Nautical Science and as a cadet at WMA he won the Matthew Flinders Cup for Navigational Excellence. 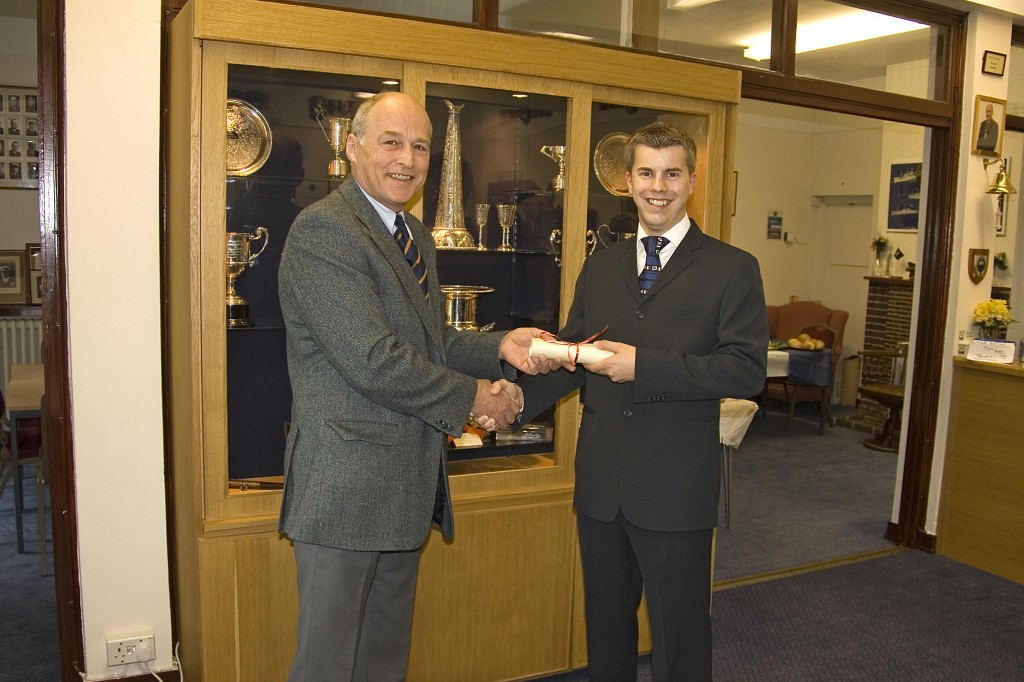 In 2010 the winner was Michael Smith, a junior deck officer with Carnival UK who had, through stint of hard work and determination, progressed from originally going to sea as a deck boy on tankers.  He was attending the Chief Mate/Master Programme HND Award one year course.  Michael was successful in obtaining his certificate and returned to sea in January 2011 with Carnival UK.

The 2011 winner was Denzil D’Silva from Goa in India who was attending the Chief Mate/Master Programme HND Award one year course.  He successfully completed his studies in July 2011. Denzil originally went to sea with Fal Shipping and after obtaining his Officer of the Watch Certificate in 2006 joined Teekay Shipping and it was his intention to return to sea with that company.

The standard of all the applicants was high and after careful deliberations the panel considered that the student who was most likely to help achieve this objective was David Bawden who is studying for his Chief Mates Certificate.

David, who is aged 49, originally trained and worked in mechanical engineering though his first love was the sea.  He spent as much time as he could in sailing vessels and for several years worked for various sailing charities, such as Ocean Youth Club, Class Afloat, Sail Training Association and the Tall Ships Youth Trust, all of which provide seagoing experience for youngsters.  Latterly he was involved with the Jubilee Sailing Trust and the disabled.

Onboard “Concordia”, a barquentine run by Montreal based West Island College, David has actually rounded Cape Horn under sail with 35 teenagers and Polish crew.

However the time came when, for financial reasons, David decided he should change course (so to speak!) and transfer his allegiance to trading vessels. He attended WMA on a self funded basis to obtain his OOW Certificate in 2008/2009 and then returned to the Jubilee Sailing Trust until joining Condor Ferries in June 2010.  David sailed on “Commodore Goodwill”, a fright ro-ro serving the Channel Islands from Portsmouth, until January 2012 when he started studying for his Chief Mates Certificate at WMA in January 2012.

David and his wife live in Devon and currently he commutes weekly to Warsash to attend the Academy.

As in previous years David was awarded a Bursary Certificate and this pleasant task took place in the Club rooms on Friday 15th June 2012. 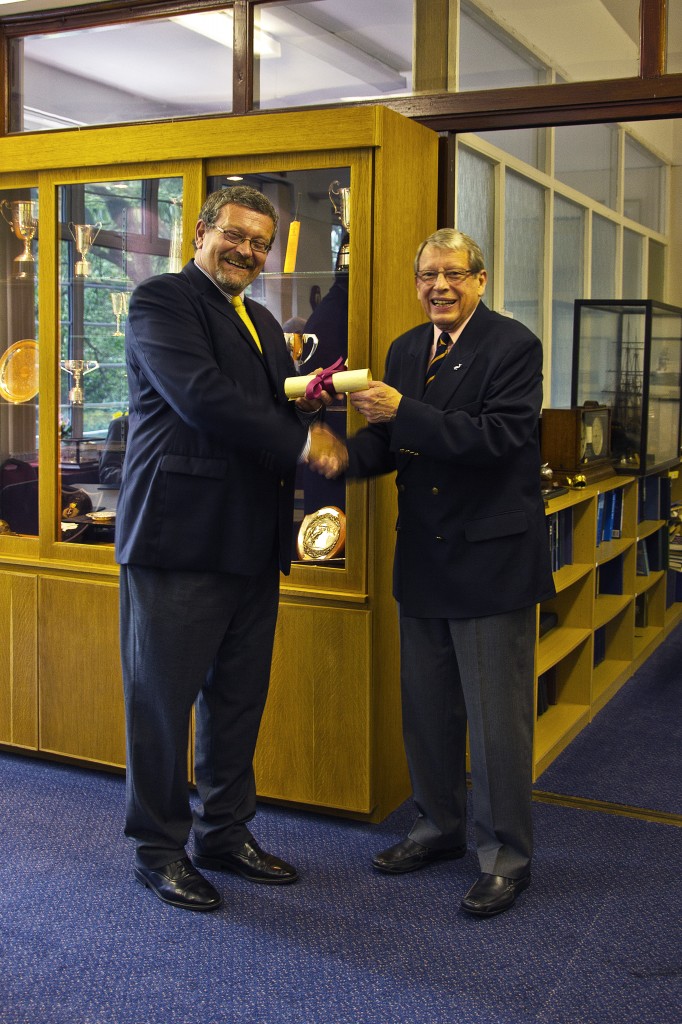 David Bawden is presented with his Bursary Certificate by Past Captain Peter Marriott, Chairman of the Bursary Committee